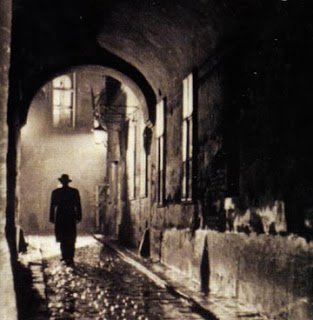 Looking for the entrance to the sewers that Harry Lime escapes down in the Third Man, somewhere near Karlsplatz. No sign of a cobbled square. Instead a major road junction and a number of modern buildings including a technical university. Some of the trams look like they could date back to 1949 though.

There’s a cinema near here that shows The Third Man every Friday, Sunday and Tuesday.

Giving up I go to a cafe which has a sign saying spaghetti bolognaise and green salad for €5,60. It comes with a started of soup of some kind filled with cheese, plus quite of bit of bread so it ends up being quite a filling lunch. Two men are in there smoking cigarettes. Two elderly English women come in and order glasses of which wine, which they down quickly then one of them says: shall we sally forth. That’s an expression a physics teacher at school used to use when dismissing the class. Then a woman comes in, greets one of the smokers before sitting somewhere else and ordering food. A man comes in with a small dog on a lead, which reminds me of the man with the small dog in The Third Man, though he doesn’t look anything like him and his dog is a different breed. The woman spots this guy sitting over the far side of the café and gestures to him. He comes over and joins her, kissing her once on each cheek.

I’ve been trying to avoid eating beef because it’s not good for the environment, but I like spaghetti bolognaise, and it’s not bad here. They’ve actually cooked the pasta properly. When I’ve had pasta in other places… in Ohrid the town was full of pizza restaurants and not wanting pizza I ordered pasta but it came smothered in cheese and was overcooked to start with but because it was sitting in juice it was even more over-cooked by the time I got to the bottom of it.

This is my last afternoon in Vienna. I’ve not done much here. Been to one art exhibition – Titian – and seen two films – Atonement, based on an Ian McEwan novel (worth watching, but the story was better than the film) and The Third Man – and spent a lot of time sitting in a cafe. They like their cafes here and have some good ones. The one I’ve been going to doubles as a bookshop and DVD shop, specializing in films and with a good English language section. They also have wifi internet, coffee and chocolate cake. The place is called Phil.

Before visiting Phil I go to MUMOK or MOMUK, which is the museum of modern art and looks a bit looks the Tate Modern, all industrial and metallic, though is quite a bit smaller, but not that small, It has 9 stories. There’s an exhibition of contemporary Chinese art, which includes some video re-enactments of famous events – 9/11, the trial of Saddam, the assassination of MLK (I think) – done with puppets and shot in black and white. Some of the events being re-enacted I didn’t recognize so maybe they weren’t all famous events. China has quite a vague law against violent and obscene images so it’s supposedly quite hard to tell what work will fall foul of the law and what will be allowed. As a result a lot of the work seemed to deal with sex and violence and gore but in quite indirect ways.

That was all on the top few levels of the gallery. Down in the basement there was Austrian art from the fifties and sixties. After the war there was, it said, quite strict censorship in Austria which by the fifties and sixties people were rebelling against, sometimes in quite extreme ways. There were pictures of Rudolf Swartzkogler who cut off his penis in installments and documented it as a work of art. Supposedly. I’d heard of him before and I’m not sure if he actually did cut it off or whether he just mutilated it a bit. There were pictures of him with his penis wrapped in bloody bandages, but none with it not wrapped in bandages or not there, so it could all have been a bit of a media stunt.

They have power points on the train. I have a compartment to myself. It’s now 23:22. The train gets into Warsaw at about 7 tomorrow morning. Passport inspectors just come round, two lots of them. The first were Czech, not very friendly, spent ages looking at my passport side on, as if he was trying to see if the pages had been inserted by a forger. In the end he accepted it as genuine and handed it back to me without saying anything. The second one was Austrian and was more friendly. I asked him who he was and who the previous lot were. I had thought they must be Polish. We must just clip the edge the Czech Republic before heading into Poland. Perhaps that’s what pisses the customs officials off, having to check the passports of people just passing through the edge of their country but not actually stopping there, or perhaps it’s just a shit job.

It’s actually not just through the edge of the Czech Republic that we go. It’s now 01:46 and we haven’t yet crossed the Polish border. There’s someone else in the compartment, sleeping with his feet on the opposite seat in front of the door so I can’t get out without moving his legs.

We stop at a deserted station. There are faint and muffled announcements. A woman’s voice. A few flecks of snow in the air. Today has been colder than yesterday. Something to do with the weather. This place is Ostrava-Svinov that we’re now pulling out of. The train creaks and it takes the corner, tilting slightly.

They’ve been doing experiments with Random Event Generators for the past 12 years, seeing if human thought can influence a string of randomly generated ones and zeros. The results show a strong deviation from pure randomness, suggesting some subjects do indeed have an effect. The ones that are most successful are those who relate to the Random Event Generator in an anthropomorphic way, believing they’re bonding with it, making friends with it and persuading it to do what they want. On average men seem to be better at this than women, but the best three subjects were all female. Geographical distance does not appear to be a factor, nor does whether or not the machine is actually switched on, suggesting that distance in time is also not a factor. There can be a delay.

It’s now 01:58 and we’ve stopped at another station. Some people have gotten on and are noisily opening and closing compartment doors further up the carriage. The place we’re now pulling away from is Ostrava hi. n.. More creaking and tilting. It sounds like the train is in pain, or extasy.

One of the exhibits in the Chinese art exhibition was a video installation with an image of an inverted city bouncing up and down to the sound of a woman moaning.