I’ve been staying with a family here for the past week: a man, a woman – who approached me at the bus station, or actually it was a guy with her who approached me asking if I needed somewhere to stay, which I did – and an occasional 20 year old son. They invited me into their living room this afternoon for a coffee and then some wine and some pumpkin. They live in the living room at the moment, at least whilst I’m there. The man told me the room I’m now staying in is actually his bedroom. I’m paying 45 euros for the week. The man, after a stroke 7 years ago, is paralysed down his left side and can no longer work. He gets a pension of 100 euros a month, which he says is not enough, particularly in winter when they have to have the heating on. It’s cold here. I’ve put the fur lining back in my coat. Only a couple of weeks ago in Greece I was lying on a beach and swimming in the sea. And a week ago in Athens I was walking around in a T-shirt. Athens is not that much further south than here, but Ohrid is 600m above sea level. Lake Ohrid is one of the oldest in the world, and Ohrid is one of the oldest known European settlements. Ohrid is the Jerusalem for Slavic peoples, he said. 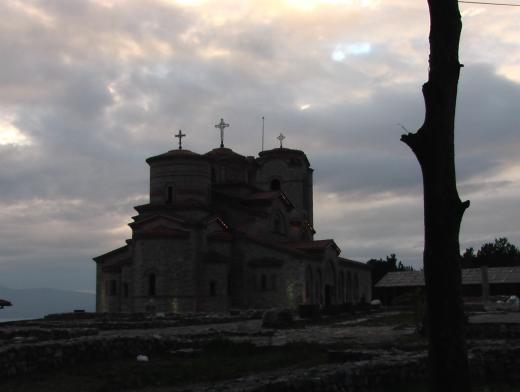 They have a picture of Tito on the wall in their hallway. Things were better in Tito’s day, he said. Tito was very popular. He looked after the working people, the middle classes. Then there wasn’t a big difference between rich and poor. There was a law that in a company the person earning the most could not earn more than five times the salary of the lowest paid worker. So the director could not earn more than five times what he paid the cleaner. But then, either after Tito died or when Yugoslavia broke up and the companies were privatized, the workers were given shares but the lion’s share of the shares were given to the directors, effectively making them the owners of the new companies.

Now everyone in Macedonia pays the same rate of income tax, 12 percent, regardless of how much they earn, and there are some who are billionaires and others who can barely afford to buy bread and not much in between. The prices of bread and milk went up today, he said, because of the hot dry summer. The wheat, or whatever it is they use to make the flour to make bread… there was a bad crop so they’re having to import it from Argentina. And the same goes for what the feed to the cows.

His wife went off to the bus station to see if there were any tourists getting off the buses. They still have two spare rooms, or maybe just one since there son is there.

The woman comes back on her own a few hours after she left. She’s partially trained as an accountant and does occasional book-keeping work for local businesses. She doesn’t like working for bosses.

He talked about the name Macedonia. When they became independent, which happened peacefully, they wanted to call the country the Republic of Macedonia but the Greeks objected since there’s a Greek province called Macedonia and they felt the Macedonians might claim this as their own. He thought this was ridiculous. Most ethnic Macedonians had left Greece when it was under military dictatorship after the 2nd World War, and Macedonia is a small and poor country whereas Greece is wealthy and a member of NATO so they’re hardly likely to invade. Still, they inserted a clause into their constitution saying they had no claims over the Greek province, but still the Greeks objected and made the Macedonians change their flag as well. Something to do with Phillip of Macedonia or Alexander the Great, not sure which. Anyway, it’s now officially known as the Former Yugoslav Republic of Macedonia.

I pointed out that there’s a French region called Bretagne and then across the Channel there’s a country called Grande Bretagne, but as far as I knew the French hadn’t objected.

He’d watched the Arsenal v. Man United match and wanted to know why the English fans were so well behaved at English football matches but when they come to Europe they get into fights. I think you English look down on Europe, he said. When all of Europe is metric you still have the old measurements, you didn’t join the euro and you drive on the left. We feel like part of Europe but you want to be different.

He flicked through the TV channels, showing me five Macedonian channels. I didn’t notice the fashion channel, which is what I’ve seen on in every bar and cafe here, always with the sound turned down. He then went through the Serbian channels. He could understand Serbo-Croat. They had to learn it at school, but now the kids don’t. A new law came in this year stating that as soon as children start school, which is when they are 6, they will be taught English. When his father was at school, before WW2 when Macedonia was ruled by the Serbs and was known as Southern Serbia, a Serbian inspector came to his father’s school to check they were being taught correctly. The inspector asked his father what nationality he was. His father stood up and said: I’m Macedonian. He got hit by the inspector and went home crying. His father asked him what was wrong and he told him about the inspector hitting him. Then his father got a visit from the school inspectors and he was forced to pay a fine for not teaching his son his correct nationality. The fine was a lot of money, enough that he had to sell some of his land to pay it. The boy got another beating, this time from his father.

Macedonia now has good relations with Serbia. When they became independent they asked the Serbs not to fight and they didn’t, though a few of them wanted to. They left their army bases and went back to Serbia, but they took everything with them – all the army equipment I guess he meant. The Macedonians didn’t mind that, he said, as long as they didn’t fight.

He flicked onto the English language new channel and they’re talking about Kosovo, some meeting going on. The Serbs have offered autonomy but the Albanian Kosovan majority want full independence. The Serbs regard Kosovo as a sacred part of Serbia; some of the oldest churches are there. He doesn’t have a high opinion of the Albanians’ ability to run things. They all like anarchy, he said. They all have guns in their homes and they’re not well educated. He talks about an Albanian who sold his daughter to a neighbouring family for marriage when she was very young. They don’t want to send their daughters to school. A law was passed recently in Albania requiring children to stay at school until 16, he said. Before they only had to attend primary school.

I asked him about religion in Yugoslavia. He said it wasn’t banned, but it wasn’t encouraged. If you wanted to get ahead in society it was best not to go to church. His father was a partisan, fighting with Tito against the fascists in the 2nd World War, and so he was a communist and an atheist. Many of the fascists he was fighting were Croatian Ustasi and Serb Chetniks. There is currently an Ustasi political party in Croatia. The Serb’s animosity towards Croatia during the breakup of Yugoslavia can be traced back to the 2nd World War. Many Croats had been Nazi sympathizers, or were actively fighting for the Nazis. Though Tito was born in Croatia, so perhaps feelings were mixed.