There’s a church on a hill by the port of Helsinki, a red brick building with gold balls sitting on the spires, making it look a bit Islamic but I think it’s a Russian orthodox church. I went in there today, just as a christening was starting. Tourists and people who’d just walked in were confined to an area by the door by ropes. There were prominent signs saying: “Silence Please! Divine service in progress” (in several languages) and images of cameras (still and video) and a mobile phone, all crossed out. Some people didn’t notice the signs or deliberately ignored them. Whenever someone took a photo a short, stern and very indignant woman would come over and wave her fist at the camera lens then point to the sign or hold it up in front of them.

The spectators outnumbered the christening party by about two to one. The vicar or priest (priest I think) was meeting with the family. Two of the women were wearing head scarfes. One must have been the mother. The priest wore a white cape with a stiff collar kind of thing several inches behind the back of his neck, a bit like Ming the Merciless though he looked more like a member of mediaeval psychadelic folk rockers, Circulus – longish straight blond hair and a goatee beard.

Another member of Circulus came into the church behind me and crossed himself several times. He then stepped over the rope barrier and mimed kissing the priest on the cheeks three or four times. Three I think, because next time it happened, with the priest and a late-arriving member of the christening party, I made a point of counting. The faces were several inches apart so there was no danger of any physical contact.

The Circulus guy who’d just arrived was quite scruffily dressed, wearing black jeans and a brown leather jacket. When he went up to the back of the church and disappeared through a painting of one of the saints or disciples that was concealing a door, I assumed he must be the organist. He had the look of a keyboard player, but in fact he turned out to be the backing vocalist..

The whole ceremony was chanted, the chanting interspersed with the priest’s echoing coughing fits, which he tried to confine to the gaps between chants but at one point couldn’t control himself.

A boy of about six standing at the back of the christening party, a few feet behind them, wearing what looked like a straight jacket because his sleeves were too long, pulled his hands out as soon as the chanting started and clapped them over his ears. A fat videographer (members of the christening party were allowed to video and take photos) who was circling around the group seemed to be deliberately this kid, pointing the camera above his head at the adults, except for a few brief moments when he tilted down onto him then back up again. A closeup of the kid with his hands over his ears and a tormented expression on his face with a soundtrack of chanting and coughing and then, after quite some time, of the baby crying, would have made a much better video than the one I imagine the videographer made.

There was a lot of chanting, but eventually the baby was dunked and splashed, which made her cry a bit but not so much. What she really didn’t like was being painted. I couldn’t really see what was going on, but it looked like the priest was painting the baby’s fingernails and toenails.

The baby was taken aside and dried off. Then there was a walking around the font table procession, the priest carrying a cross and waving it about whilst everyone else carried a candle, except for the mother who was carrying the baby, which had now stopped crying. Then there was a kissing of the cross ceremony, which the videographer started to direct, gesturing to people who were standing back to come forward and give it a kiss, which they did. The priest held it out for them. He held it in front of the baby’s face but the baby didn’t kiss it. She seemed to be laughing. Lastly it was the backing vocalist’s turn. He kissed the cross and then kissed the priest’s fingers.

As the ceremony came to an end people emerged from the background and started clearing things away. A guy in a black suit with a pony tail who looked like a character from the Sopranos packed away the candles then helped someone else carry out the font, which they emptied over the grassy knoll outside. Further down the hill daffodils were starting to stick their heads up above the earth. 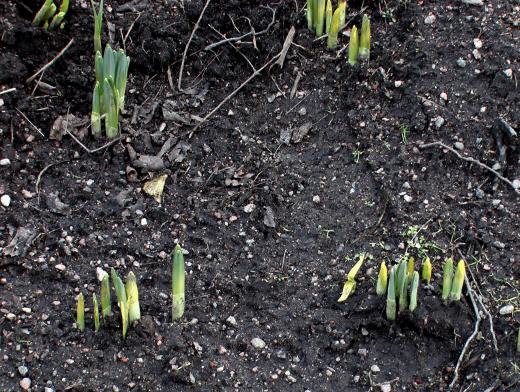