I got the train from St. Malo yesterday, and almost got off at the wrong stop since there’s a place called Quimperle just up the line from here. I heard the announcement: Nous arrivons a Quimper … so I got my rucksack down and got off (waiting until the train had stopped). But something wasn’t right. Other people were still on the train, not getting off. Quimper is supposed to be the end of the line.

I asked a woman who was getting on with a child in a pushchair if this was Quimper. She said it was. I saw a sign on the platform: Q.U.I.M… The rest of it was obscured. The train was about to leave. Then I saw another sign that said Quimperle. I remembered from the distant past having heard of the existence of such a place. I want back to the woman with the pushchair who was still standing by the door of the train saying goodbye to someone I think (otherwise I might have offered to help her with the pushchair). This time I asked her if this train was for Quimper. She seemed a little itty bitty pissed off cos I was interrupting her emotional farewell to whoever it was, but sometimes you have to put yourself first. I was thinking what difference does it make if I get off in Quimperle or Quimper. I don’t know either place. I’ve pretty much just put a pin in a map and decided that’s where I’m going, and with this interrail ticket it doesn’t cost anything to go there. But I did want to go to the place where I’d decided to go. To go somewhere different might be a bad omen.

Yes, this train is for Quimper, she snapped.

Okay. A minute ago you told me this station was Quimper. Now you’re telling me this train is going to Quimper. I probably would have got more sense if I’d asked your pushchair…

I didn’t say any of that (I thanked her for her kind assistance) and got back on the train. 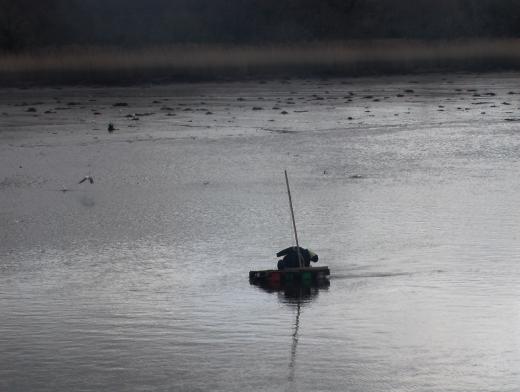 So now I’m in Quimper, in a hotel opposite the station with wireless internet access. Sitting in the bar with my laptop and an orange juice, waiting for a croque monsieur to arrive.

Just had to lift the laptop up for the table cloth (actually a bit of paper).

There’s an ad on the wall for Breizh Cola – Breton cola? So they’re into the Boycott Coca Cola thing here?

A couple of dogs sat and watched me eat my croque monsieur, which is a bit like a welsh rabbit, but with ham in it. I think that’s the difference between a croque monsieur and a croque madame. The ham. Or it could be the egg.

There are rabbits in David Lynch’s new film, Inland Empire, which I went to see at the local arts cinema last night. In English, apart from the bits in Polish when I had to read the French subtitles. It was very good. Well worth seeing if you get the chance, though not sure if it has a UK distribution deal. If you come to France to see it make sure it says VO (Version Original) or VOSTF (Version Original Sous-Titres Français).