Back in London after a couple of weeks in Eastbourne, now staying in Peckham Rye, but probably only for a few more days. I’ve been looking into getting a boat to Cuba, which seems to be possible but not so easy. There was a freighter going there from Lisbon, which took passengers and charged 90 Euros a day, but that’s fallen through, so now I’m looking into cruise ships, which aren’t as expensive as I’d thought they might be, about £500 to £700 for trans-Atlantic.

Last night went to the launch of Hollywood, Politics and Society by steely (according to this Guardian review) Mark Wheeler – available in all good book shops and maybe a few bad ones, and also on Amazon, though they say they only have one left in stock. I bought two copies, one for me and one for a Christmas present for Dr. Barbara, each signed by the author and with a £1.99 discount. Haven’t read either of them yet, but apparently there’s all you ever wanted to know about Fatty Arbuckle, Arnold Swarzenegger, Louis B Mayer, HUAC, The Will Hays code and various other things, and a picture of Dr. Wheeler on the front cover: 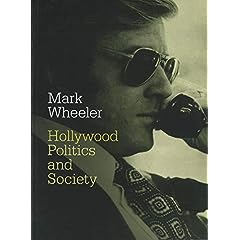 Free wine in a hot basement of the University of London followed a walk to a pub where I met someone who actually admitted to having read this blog about a year ago when I was cycling across Canada so I thought it was about time I wrote something else, though not sure now that I’m no longer cycling how the Legjoints title is relevant. I walked to the pub last night, so perhaps it is, and having been walking from one place to another with my rucksack on my back recently: Crystal Palace, Peckham Rye, Forest Hill, Nunhead, Camberwell, Brixton, Eastbourne… Averaging about two weeks in one place.

Also, I got a comment to an old Indian post on this blog yesterday. Someone called Anonymous saying: “smoking god¿?¿?” to which I didn’t reply: “Why shouldn’t a god smoke? If god is everything then god must do everything, including smoking, and he must be everything, including being a smoker. The post was in relation to followers of Shiva smoking Chillum in order to get closer to the god Shiva. I didn’t say that Shiva himself smoked. Here’s what I did say: click here to see for yourself and make up your own mind.