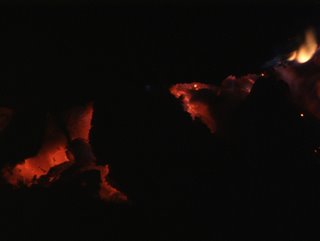 At the time there were three of us. Four including him. Twenty or thirty around the fire, and maybe a hundred scattered across Triund in caves and shepherds’ huts and chai shops.

In the present tense a woman asks an old man the time. She points to the spot on her wrist where a watch would be but isn’t. He doesn’t understand. He isn’t wearing a watch. But he must understand because he goes over to the clock above the counter and peers at it. It’s a quarter past eight.

I didn’t sleep at all the night before I went to Triund. Someone said that’d be because of the full moon, but how could it be? I was in my bed, the curtains were drawn. I couldn’t see the moon. We’re eighty percent water, she said, and the moon causes the tides so think what effect it must have on us. I couldn’t think of an effect, but I couldn’t think of a good argument to refute what she was saying so I said nothing, but I think the reason I didn’t sleep that night had more to do with other things. There are always other things. Many of them.

On Triund people sat around a fire and talked, played bongo drums and didgeridoos, twirled fire through the night. Other things happened, but my memory has forgotten them. Mostly things didn’t happen. It was a night when many things could have happened but didn’t. The moon crossed the sky smiling at all of the things which weren’t happening. When Venus rose behind one of the mountains the ones who were still awake thought this was highly significant. The moon and Venus in the same night! At first they thought it was a light on the mountain, then Jupiter, then Venus, but a Venus that was moving across the sky more quickly than anything else.

Some of the memories I have of this night are false. They’re screen memories, placed there by the Venusians. The Venusians are not actually from Venus, not the Venus that we know as Venus. There was no physical abduction. It’s all done in the mind. It might just as well be a dream. No, on second thoughts perhaps it was physical.

Those with mundane lives are more likely to be abducted. People whose lives are full of events, people who are rushing from one place to another and back again don’t interest the Venusians. They can’t tune into those kinds of minds. They’re too noisy. A quiet mind with few thoughts but many beliefs is the kind they like the most.

A fork would be nice. The palak paneer and plain rice I ordered has arrived, but with just a spoon. No fork. I’m not going to ask for a fork. I never ask for things. I always accept what I’m given. The palak paneer is good, but eating with a spoon reminds me of when I was about a year old, sitting in a highchair and being force fed some disgusting baby food puree that looked like it had been eaten several times before.

The train disappears into the tunnel.

If you empty your mind of all thoughts, not just the trivial thoughts but the serious ones as well, then you will be able to follow the Venusians into the tenth dimension. How can you follow someone into the tenth dimension? That’s like following someone into the third dimension, or into time. But the tenth dimension is different, and sometimes they say things that aren’t exactly true because if they told us the truth we wouldn’t understand it. They tell us they’re from Venus because they think that’ll be easier for us to comprehend, like a parent telling a child that their Christmas presents come from a fat man with a white beard.

Venus is a tenth dimensional portal.

If there are inconsistencies it’s because I’m making this up as I go along. But that doesn’t necessarily mean it’s not true. Truth and untruth are illusions anyway, say the Venusians. Like reality and unreality. Just projections of your overly thinking mind.

Does the set of all sets which do not contain themselves contain itself?

I could make up another story, one about me sitting in the Milky Way cafe, with its hand drawn menu. I could write about the menu, and the food, and the other people in here, and the music that’s playing – it was Phil Collins earlier, and no matter how much I told myself it was just an illusion it was still painful. The Venusians are very fond of Phil Collins. They see him as one of their own. We are all one. We are all Phil Collins. His band, Genesis, took its name from one of the Venusian’s first publications. They are responsible for most of the Earth’s religious texts. Not that they were trying to control us. They were just having a laugh. That’s how they put it. They wanted to see what would happen. Like a child pulling the legs off a spider.

There’s a wooden sculpture of a moose mounted on the wall of the Milky Way cafe. It’s not life size. It’s more the size of a bird, and it looks a bit like a bird, with leaves for ears and branches growing out of its neck. That could be what it is. I don’t know if they have mooses (meese?) here. But they could have sculptures without having the real thing. You can make a sculpture of anything if you want to. Go ahead. It doesn’t have to resemble something in the real world (which isn’t real anyway). It could resemble something on Venus, but only if you think there is something on Venus.