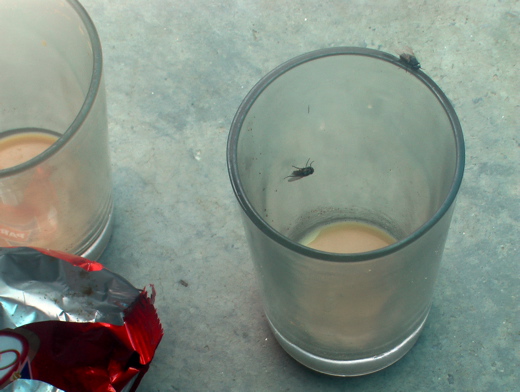 Walking up to Triund at the last chai shop before the top a guy in uniform with a gun (police or army, I’m not sure which) and someone in a checked shirt stop. Namaste. You are from which country? asks the plain clothes one. England. Let me see your passport. I don’t have my passport on me but I show him my driving licence. Two guys walk past and they are asked the same question but their English isn’t good and they don’t answer, they just keep walking.

At the top I’m told there are a number of police hanging around, but I don’t see them. They have asked a number of people to leave but most people have just ignored them and are still there. Apparently there was an article in the newspaper saying there was going to be an illegal trance party up on Triund so the police want to put a stop to it. But there are no sound systems up there, and the only electricity comes from the car batteries the chai shops have to power their radios and portable CD players. Some people are saying they were just after some baksheesh. I don’t know if they took any. They didn’t ask me for anything.