There are dense toxic gases and bacteria the size of buses, but apart from that, unless you’re able to see in the tenth dimension, there’s not much on Venus. Some call it the ninth dimension, some the eleventh, some the first, some say it isn’t a dimension at all. It doesn’t really matter what you call it, except to the Venusians for whom it’s very definitely the tenth dimension, and they get quite offended if you suggest it isn’t. 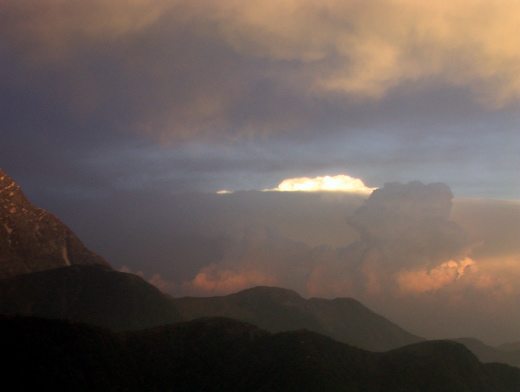 A drum seller tries to sell his drums to four Israeli women. They pat his drums like they’re small dogs, but they don’t buy. He puts them down in front of the table I’m sitting at. I’m back in the Milky Way cafe which opens out onto the main street running through Dharamkot. The only traffic on this street is pedestrians. The cars and rickshaws never come this far down, and you don’t see cows around here very often. Nor monkeys. Dogs occasionally.

There are dark clouds and thunder rumbling over the mountains. If a Venusian spaceship were to land up on Triund you wouldn’t see it or hear it.

Someone from my guest house went to the local hospital yesterday with amoebic dysentery. She was drinking from the spring on Triund, and it was when she was up there that she started feeling ill, though she also drunk from the spring down in Bhagsu so it could’ve been from that, or from food. Down at the hospital she said was the English guy from the bar last week with the theory that each nation is a part of the body: England is the intellect, France the nose, Spain the tongue, Italy the chin etc.. He was having problems with his Peoples’ Republic of China (arse), and went into great detail apparently about his stool sample, and the efforts he went to to produce it.

The tenth dimension, as the Venusians call it, is the quantum dimension. It cuts across the parallel universes, linking every possible reality and every impossible unreality. That’s why they go to places like Triund where people sit around a fire competing as to who can come up with the most crazy way out belief. The more stupid your belief sounds the more enlightened you are. The Venusians like this. It gives them many eons of pleasure in many temporal dimensions. I think they picked me up because I wasn’t saying anything. They wanted to know what I was thinking, but instead of just asking me they prodded my brain with quantum lasers, if there is such a thing. They prodded my brain with something, and took some parts of it away for further examination.

If there are inconsistencies it doesn’t matter. Everything is true in the tenth dimension. And everything is false as well. You don’t have to believe any of this. Whatever you choose to believe your belief will be true because you will live in the universe where it is true. If at some point one of your beliefs is shown to be untrue that will indicate that you have taking a journey through the tenth dimension, transported by Venusians most likely, to a new reality, one with a new set of truths.

It’s stopped raining now. The mutter paneer and rice is settling in my stomach. I’ll get up and go soon. Walk down to McLeod Ganj, past the monkeys feeding out of the skip that’s never emptied, past the tall thin houses they started to build but then decided not to, past the road works they always have at some point on that road, and passed by the rickshaws, cars, motorbikes and scooters cruising down the hill with their engines turned off. It’s cold though. Maybe I should pick up my jacket and go via Bhagsu. Walking through the woods I’ll be sheltered if it starts to rain again.

There are some universes in which the Venusians do not exist. There are some in which the planet Venus does not exist. That creates problems for the Venusians. They can’t travel to universes where they don’t exist, but if they do manage to travel to those universes then they become universes in which they do exist. In order to travel to a particular universe they have to be observed by that universe, or by a conscious entity within that universe. (In many universes, including the one I’m now in, all entities are conscious to some extent. The mutter paneer I just ate knew it was being eaten, and now it knows it’s being digested, though it doesn’t know those things in the same way that I know things.) They need belief, like gods and babies. (Babies cry when no one is giving them attention because they fear that if they’re not being observed they’ll stop existing.) They have frequently been worshipped. This amuses them. They can’t understand why human beings take them so seriously. We have no sense of humour, they laugh. To the Venusians everything is a joke, except the tenth dimension of course. Nothing makes them laugh more than a sincerely held belief. I had them in stitches, even though I told them I didn’t believe in anything. That’s a belief, they laughed, before disappearing into a wormhole and dumping me back on Triund from a great height just as Venus was vanishing and the sun was rising. I have bruises on my Peoples’ Republic to prove it.