I’m waiting for the train for Delhi but have just realized I don’t need to go to Delhi. I want to get up to the mountains where it’ll be cooler and was thinking of heading first to Rishikesh and assumed to get there I would have to go via Delhi, but I could have got a train straight there almost, saving a day of travelling.

I’ll arrive in Delhi tomorrow morning and probably won’t stay the night there if I can help it. I think Delhi is hotter than here. I’ll arrive too late to get the morning train to Haridwar, which is an hour away from Rishikesh by bus, but will try to get a bus there. I think the buses run all day and take about 7 hours, and probably won’t be as comfortable as the train, though the trains I’ve been on haven’t been very comfortable. I’ve been travelling 2nd sleeper class, which give you a padded ledge with a fan above. An air conditioned carriage costs more than twice as much. But it’ll be night so hopefully not too hot.

I didn’t sleep last night and got up early and went for a 6am boat ride on the river. As I came out of the guest house a guy was standing right outside the door, at the top of the steps leading down to the ghat. You want a boat? He was with a boy. I asked him how much it would cost. How much do you want to pay? No. You tell me how much it costs. How much do you want to pay? Okay. I’ll pay 50. Is that reasonable? 70, he says. I agree to that and we walk down to the river’s edge where there are loads of boats tied up. Most of them look quite rickety. His does. It’s a small rowing boat. He pulls it towards the bottom step and I step onboard. Two boys get on with saucers of flowers with candles in the middle. Each of them hands me one. The guy says they’re for good karma. Okay. How much? 10 Rupees each, says the older boy. Five I say. Ten, he says. I’ll give you 10 for the two of them. That’s all the change I have. I don’t want to give them a hundred Rupee note. I count out 10 Rupees in change and give it to the older boy. He walks off with it, onto another boat, leaving the younger boy still there looking a bit upset. I call out to the boy with the money to share it with his friend, but he ignores me. The younger kid is now asking for money. He wants five Rupees and looks like he’ll cry if I don’t give it to him, so I don’t. I mean I do.

The boy who was with the man gets onboard. The man is still holding onto the boat. The boy sits in the rower’s seat and the man pushes us off. So the boy’s rowing, or trying to. He’s not steering a very straight course and isn’t looking where he’s going.

We get out onto the river without any major collisions, just a few minor ones. You want one hour? It’s 6 o’clock now. It was 6 o’clock when I got up so it must be after that now. I’m not wearing my watch, but it doesn’t matter. I forgot to charge up my camera batteries so probably only have 20 minutes left, and all I really want to do is take some photos of the ghats from the river. 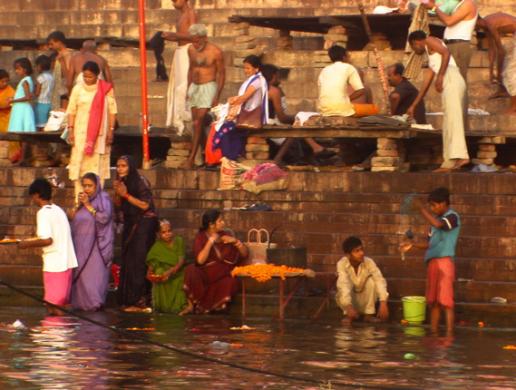 We get quite a way before my battery runs out, passing people bathing and doing their laundry. A whole line of men slapping clothes against special stone steps that appear to have been designed with this purpose in mind. Slapping stones. One guy’s really going for it. Looks like a good way to vent your anger first thing in the morning. 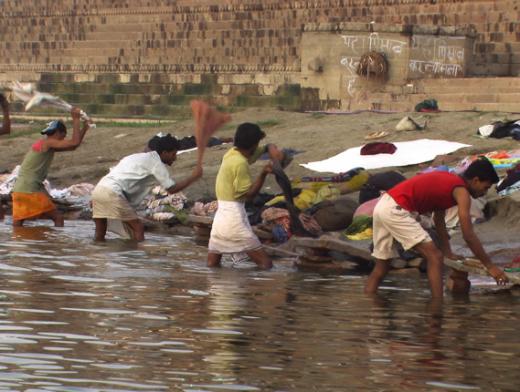