In Varanasi it’s impossible to walk from A to B without several people asking where you going? what you want? hashish? opium? come this way. good hotel here. you want cheap hotel? very nice room. rickshaw? This morning I tried the quiet mumbling tactic with the first guy, head down, not making eye contact, quietly muttering vague answers or obscenities that he couldn’t understand. That worked quite well. He gave up after about a minute, or passed the job onto his son cos then I was followed along the ghat having questions fired at me from behind by a kid. This time I tried the answering back technique, asking him where he was going and why he was following me. I also tried a bit of zig-zagging, stopping and walking back the way I’d come, pausing for several seconds without warning. He lasted longer than his father, but only about three minutes.

Maybe they have territories they can’t stray beyond. Preying on a tourist outside your territory could incur repercussions from the local landlords.

Sitting in a leafy courtyard restaurant in a guest house that I’m not staying in. This place is a lot better than the place I am staying in, but it was full last night. It’s quite peaceful. The loudest sounds are the birds and the Germans. Everyone here reminds me of someone. All people are reincarnations of other people, possibly living people, possibly dead people. No one is unique. There are too many people for anyone to be unique.

The guy on the way here, the father, wanted to show me the burning ghats. You can see dead bodies over here. I could see the fires, but wanted to have breakfast first. Dying here will free people from moksha, the cycle of life and death, and bathing in the Ganges can hasten the onset of death. I met someone in Kolkata who said he didn’t believe the statistics about pollution levels and had gone swimming in the river. It’s a river, he said. It’s moving so it can never be that polluted.

I believe the statistics, the fact that sewers from the city pump their waste directly into the river and the fact that this guy swimming in it said he’d bumped into a dead cow. 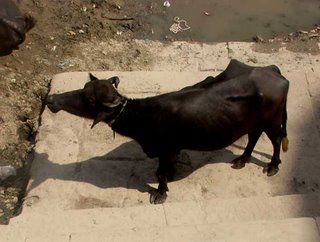 There seems to be a higher density of cows in Varanasi than in any field I’ve ever come across. They’re everywhere, and their shit is in even more places.