A day of live music, two dead bodies, a procession of boats and dirty linen. I had to be an irritating fussy tourist earlier when I moved to a new room, since the one I was in last night didn’t have a window. They told me the new room had been cleaned but it hadn’t. There were stains on the sheets and the bin was full of rotting leaves that smelt like they’d been there since last autumn. The kid they sent up to do the sheets seemed a bit shocked when I asked him to empty the bin as well. He came back a while later with a bucket. This bucket has just been washed, he said. This place is cheap, only 100 Rupees (£1.30) a night, but it’s pretty crap. I have my own bathroom but the shower doesn’t work and the toilet leaks and smells. I’ve booked a train ticket for the day after tomorrow to Delhi, so I have to stay in Varanasi another night (I tried to book the train for tomorrow but couldn’t) so if there’s space in the guest house down the road I’ll move there tomorrow. It’s 250 a night, and though I haven’t seen the rooms I’ve been eating in the restaurant and the food is good and the restaurant is a nice place to be, in a leafy and shady courtyard.

I walked along the ghats this afternoon. Some of the ghats are burning ghats, where they cremate people over open fires. I watched as one body was carried down to the river on a bamboo stretcher. The body was covered in red and yellow silk. When they reached the edge o the river they laid the stretcher down in it, covering the silk in the holy water of the Ganges. They uncovered the face. It looked like a woman, though it was hard to tell since I was some way away, but it could see a lot of black hair. Men scooped water over the face. They were all men down there. Whatever female relatives there may have been played no part in this part of the ceremony. One of the men took out his mobile phone and lined it up to take a photo of the corpse. It took him ages to either take the picture or to take one he was satisfied with. Once he had he showed it to the others.

I didn’t stay to see the burning as I was distracted by a procession of boats going along the river. A kid said Krishna is coming. On the boats were people dressed in various costumes. Perhaps they were dressed as gods. I’m not sure what Krishna looks like so couldn’t spot him. 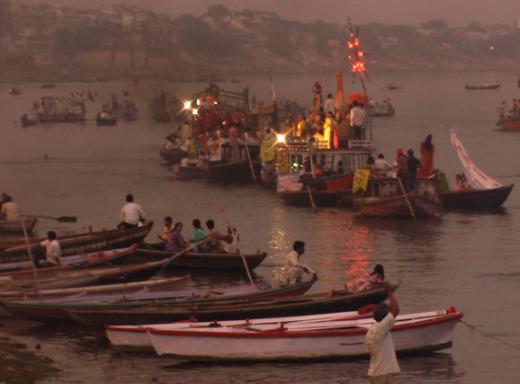 The second corpse took me by surprise. I was heading back to my dirty guest house just now, watching the fires burning on Meer Ghat, escaping from the touts telling me of a good place where I could watch the burning, up the steps avoiding the cows and their shit in the dark (there was a power cut), getting splashed by someone’s outdoor shower, past the chai shop and then reaching what looks like my alleyway I find it blocked with people and they’re not making way for me so I push my way past them and realize that on my right, just above my head, is a bamboo stretcher covered in silk.

There’s a tailless gecko in the bathroom. One with a tail came into my room just now, crawled around the walls and then left through the window.

So many chaotic images today all getting mixed up. As I took photos of the procession of boats a guy said: Hello friend. A good Indian spectacle. And I said yes.

Talking to someone earlier who used to be a stamp dealer, sending old Indian stamps to Stanley Gibbons in London. He could remember the address, on the Strand. He could also remember Jack Hobbs coming to play cricket in India, in 1964 I think. Not sure who won. There was a one day between England and India today. Not sure who won that. England were all out for about 200 last I heard, and India were batting. Something like 116 for four. I’m not really into cricket, but try to keep track of the scores for when people talk to me. It just makes things easier. I know England have lost all of the one day matches so far. 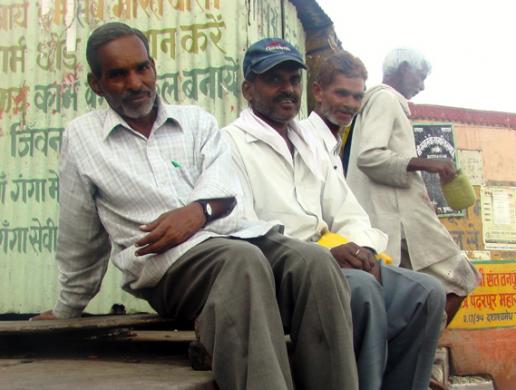 The stamp dealer (the one on the left) had a lot to say about the problems of India. Not enough education. Only 30-35% of Indian children go to school, he said. He liked numbers. What is the maximum temperature in London at the moment. About 20, I said. And what is the minimum temperature? About 5, I said. The population of London is about 12 million, isn’t it? About 10 million, I said, though it depends where you draw the edge of London. And then onto the pound Rupee exchange rate, how the Rupee used to be much stronger but over the years it’s been devalued. And how many children Indian families have. Not as many as they used to. Now people often only have two or three children. And the proportion of Indians dependent on irrigation – about 80% I think he said. Far more than in America and Europe. And Australia is one and a half times the size of India. Too much money is spent on weapons. If they spent that money on development then the people would be happy. We are all human beings. Countries don’t matter. Men shouldn’t think about countries, they should think about the world.