I didn’t tell anyone it was my birthday yesterday but three people asked me my age. It’s good to get used to saying it. 40. 40. 40.

Walking down Sudder Street not really going anyone one of the woman with children beggars whom I’ve refused to give money on a number of occasions stops me and wants to talk. She invites me to sit down on the pavement and asks questions. The usual questions: What’s your name? Where are you from? What do you do? Are you married? Why not? Her friend’s child, who I think is a girl – she has a spot on her forehead – tries to hug me but she has milky dribble all over her chin so I try to move away. She introduces me to her two sons, instructing them to call me uncle. She asks me if I want chai, producing a steel pot. Err, okay. Her older son goes off with the pot and comes back with it filled with chai. She pours out a small plastic cup for me. 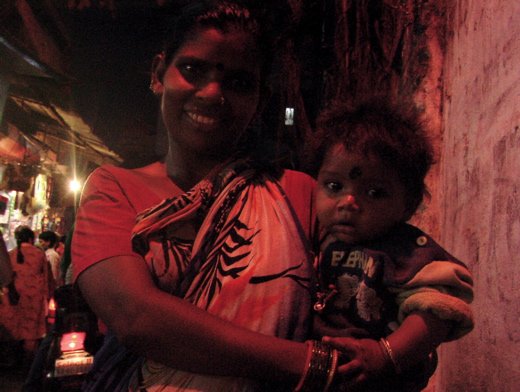 As I leave I give her and her friend 10 Rupees each, though her friend is saying no, don’t give me money. You go to the shop and buy food for us. I can’t buy anything with 10 Rupees. We need rice, and cooking oil costs 70 Rupees. I tell her 10 Rupees is all she’s getting and leave to have dinner in one of the touristy restaurants: dhal curry, steamed rice, lemon soda and a cup of tea. It comes to 80 Rupees.

Walking back along Sudder Street the woman’s son, the older one who got the chai, spots me and walks along with me, holding my hand and saying give me 10 Rupees uncle, please uncle, I need 10 Rupees for rice. He’s making the eating gesture with his right hand. I tell him I gave his mother 10 Rupees earlier and I’m not giving him any more. I don’t like giving money to children.

Back at the hotel I meet the Japanese woman who is in the room next to mine. I bumped into her in the street earlier, when I was on my way to the restaurant, and she told me that right after she’d seen me a woman came up to her, really angry, saying: what did you say to that man? What did you tell him?

She now tells me those women are not real beggars. They have a house that they go back to each evening. They’re not really homeless. The really poor people don’t speak good English, or any English, and they have their ways of getting by.

When she said they live in a house, I at first thought of a three bedroom semi with fitted kitchen, living room, dining area and a small but cozy garden, but then thought it’s probably not like that at all. I’ve seen some of the places where people live and often they’re just one step up from sleeping on the street.

Down the other end of Sudder Street, where there are fewer tourists, there are makeshift shelters leaning against the fence to the Indian Museum and on the other side of the street leaning against a wall. There are people, adults and children sleeping on the pavement. Others going through rubbish. They don’t seem to approach people and demand money, they don’t stand outside the tourist restaurants, though sometimes as I walk past their children come up to me making eating gestures, but I don’t like giving money to children. 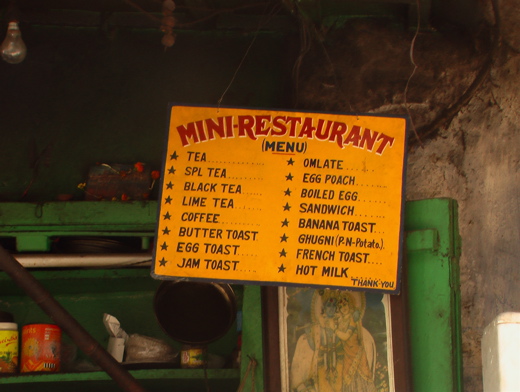