I went to Stanley Park today, just half an hour’s walk from downtown, and had a look at the Pacific Ocean.

Back at the hostel now I’ve been searching for maps on the internet showing where I’ve been. Here’s one which shows my route through the Okanagan Valley about a week ago (click on the map to enlarge it). 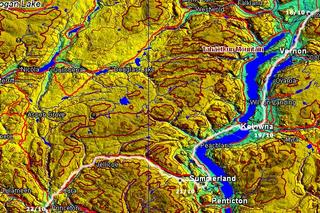 It was raining most of the day I cycled down to Kelowna and the bike needed attention. I tried cleaning it up but the pedals were grinding as they went round, and the handlebars had developed a slight wobble.

I spent a day in Kelowna getting the bike serviced (cleaned out the bottom bracket which was full of water and gunk and replaced the handlebar stem) and the guys in the bike shop recommended that I take the Kettle Valley Railway Trail, which runs along the path of a disused railway. I got on this just after Summerland, and though they’d assured me it would be a compact gravel path, fine for my bike, it turned out to be a pretty rough trail – sandy almost at first so my tyres were sinking into it but then just rough and rocky. It was about 4 in the afternoon when I got onto the trail, and by 5 the sun had disappeared behind the hills.

I put up the tent and got inside it quite early since it was getting cold, and then during the night got very cold. In the morning the drops of water on the outside of the tent had frozen and I had to scrape them off.

The trail got better the following day. It was climbing, though very gradually, at no more than a 2 percent incline. Once the sun got into the valley it warmed up and I met a couple on an ATV (All Terrain Vehicle) coming the other way along the trail. I chatted to them for a while. They informed me that it was Saturday. I had been thinking it was Sunday. They also told me I was near the top and afterwards it would be all downhill to Princeton. They also told me that one of the trestles was out further up and I’d have to get off the trail and onto the road that runs parallel to it. When I did get onto the road I decided it was better than the trail and stayed on it, though at that point it wasn’t a paved road, but was good enough that I could do about twice the speed I was doing on the trail. It was starting to get late and I didn’t want to spend another night camping up there. I had no food or water left and so wanted to get to the next town, which was Princeton. The places in between that are marked on the map are barely places at all – just a few houses, nothing of much use. Jellicoe was supposed to have an inn but I went past it. By that point the road was paved and going downhill and I was doing 40km/h and knew I could get to Princeton before sunset, which I did.

The following day, after a night of luxury in the Princeton Motel, was one of the toughest of the whole trip, heading into Manning Provincial Park, going up hills and then down hills, but up more than down, climbing towards Allison Pass, which at 1342m is the second highest pass in British Columbia (higher than Rogers Pass, which I’d struggled to get over). And the hills here were steeper than any I’d encountered going over the Rockies.