Fourth day in Calgary and getting into a routine, going to the library and getting on the internet during the morning, but first going for a coffee and a fudgy brownie.

I’ve been going through past video tapes – see the pictures at the video stills website. I’ve got up to the point where I was scared by what I thought was a bear eating my breakfast. 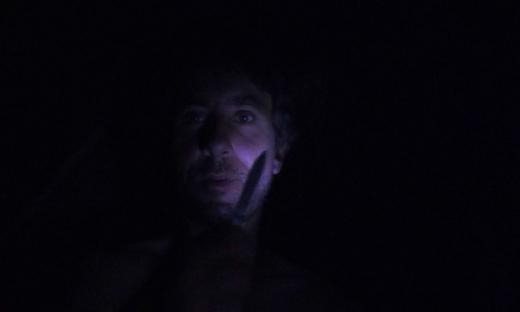 Back to the present. Tomorrow I head off into the mountains. I’ve had the bike serviced – there’s a cog gone missing from one of the gears but I think I can manage without it, otherwise the bike’s fine – and I’ve bought a ballaclava and an Ali G style skull cap (for wearing under the cycling helmet), some warm gloves and and new pair of shoes – running shoes rather than cycling shoes since I couldn’t walk around in cycling shoes and can’t afford (weight + money) to have two pairs of shoes, but they’re waterproof and ought to be warmer than the crappy old Adidas trainers I’ve been wearing up to now.

The thing with cycling is that it’s your extremeties that feel the cold: hands, feet and nose. I think I’ll have all of those properly covered now. There’s been snow in the mountains, but I’ve been told it doesn’t last at this time of year. In the bike shop they advised against putting on snow tyres.

Let’s check the weather forecast for Banff, which is where I hope to be the day after tomorrow (Monday). 9 degrees is okay. Tomorrow I aim to do 100km to Canmore, which apparently is not too hilly. I’ve made a booking for the hostel there. Would have gone today but the hostel was all booked up, due to it being Thanksgiving weekend.

Canmore to Banff is only 25km so although that will be hilly it should be easy (?) to do in a day. May stay another day in Banff since there are supposed to be hot springs there which could be good for my knee. Depends what the weather’s like and what the forecast is, and I’ll speak to people there about the next leg, up to Lake Louise where there’s another hostel.

It’s going to be tough going, but I’ll make sure the right leg does its fair share.

It’s been good to have a break in Calgary, though I’m ready to leave now. I went to a local bar last night, which was good. Alberta allows smoking in bars which I think makes them better than bars in places where smoking is banned. I think I’d think that even if I were a non-smoker, which I’m not, especially in towns – I’ve been trying not to smoke whilst cycling, and will try not to up in the mountains where the air is thin.