I’ve decided my right leg has not been pulling (pushing?) its weight, leaving the left leg to do most of the work. That’s why I keep getting pain in my left leg but not in the right leg, so I’ve been concentrating on making the right leg do its fair share of the work.

The saddle sores I’ve been getting recently have also been mainly on the left side.

Dr Mark informs me that it may be something to do with the ligaments, which I believe are the bits behind the knee. That’s certainly where it hurts, though stretching exercises do help. 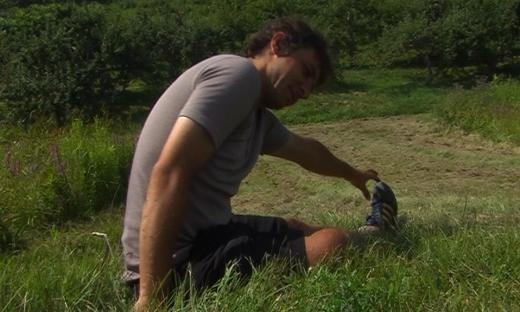 This is where the problems first started, back in Quebec, cycling along the St Laurence, which was very easy going, though it was after several rest days in Quebec City which maybe caused the ligaments to tighten up. The toughest days are usually ones following rest days. But I need the rest days. Without them I wouldn’t be able to write anything on here.

Here is the lazy right leg, with the marks of the chain across it, giving the imnpression that it puts in a lot of effort, and until recently I was taken in by this. 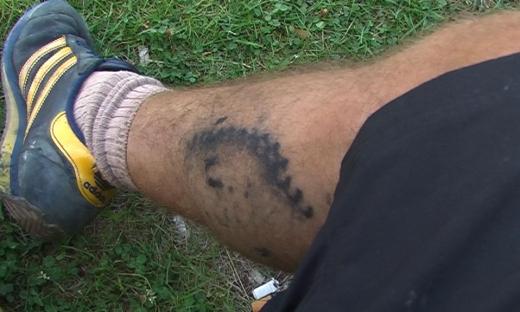 There must be something in my brain that causes the left leg to work harder than the right leg. I’m right handed, but not sure what footed or legged I am. I was never much good at football so couldn’t tell.

But perhaps it’s nothing to do with that.

The left side of the brain controls the right side of the body, I think. It also controls langauge, whereas the right side of the brain is more into images. When I’m cycling along I’m thinking more in images, I think, and not so much in words, though words do go through my head. I also think a lot about numbers, particularly going across the praries, looking down at the speedometer every few seconds to see how fast (or slow) I’m going, then pressing the button and looking at the clock to see how many hours daylight I have left, then looking at the map to see where so many hours cycling at whatever speed gets me to and whether there’s likely to be something to eat there and somewhere to sleep there.